Jen Morris
Work > Pastoral
Statement
Vermont farmers must often hold two jobs to make ends meet– facts at odds with the venerated organic-culture and the idealized, pastoral imagery that characterizes the state. Pastoral thinks through the implications of where Vermont exists today in terms of industry, as well as a gentrification of the landscape. This index of images iterates wider concerns with issues of power, resource distribution and aesthetics.
Pastoral 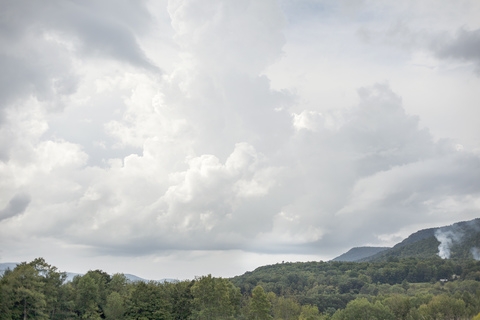 Near Mount Aeolus and Dorset Hill
2013

‘Open burning’ is a practice some farmers use to manage fields and eliminate brush and tree cuttings. For most purposes, permits from the state are not required. 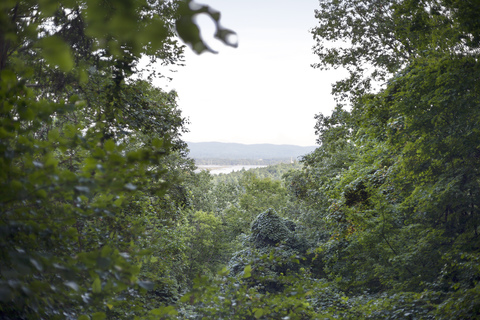 View of the Connecticut River from Fort Dummer
2013

The nuclear power plant, Vermont Yankee, represents an increasingly common tale of lasting environmental impact, industry, and a community’s economic wellbeing. In 2010, the Vermont Senate voted 24 to 4 to close it. Then in 2012, a District Court Judge in Brattleboro ruled that the state did not have this authority. The Nuclear Regulatory Commission sought to renew the operating license for an additional 20 years. Finally, Entergy, the company based in Louisiana that owns the plant, announced their intent to shut down Vermont Yankee and begin its decommission due to loss of revenue. The last day of operation was December 29, 2014. 600+ jobs are affected, the clean-up of the site will take decades and over 500 million USD, and the waste will be stored on sight indefinitely. 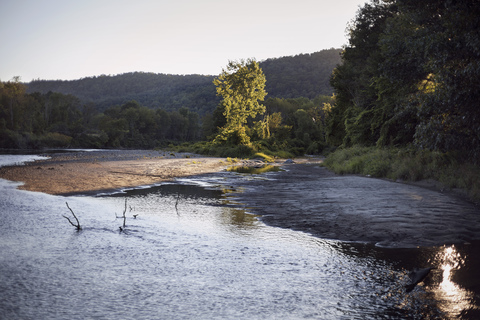 Tropical Storm Irene inundated Vermont’s many rivers with silt. This silt was carried with flood waters as it tore over agriculture, industry, and homes. Tests of these silt deposits often revealed it was contaminated with petroleum and other chemicals. 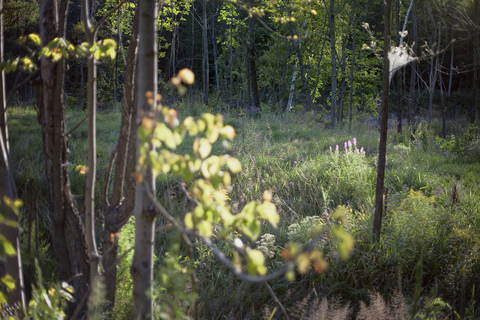 Detail, Near the White River, Southwest of Bethel
2013 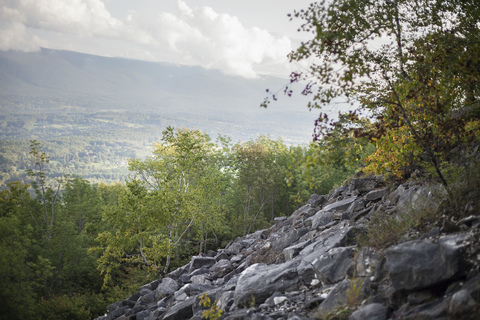 Quarry waste piles contain stone discarded due to its lower quality. A successful quarry that has been in operation for a long time creates a lot of waste, and these piles rebuild the landscape creating new topographies of their own. 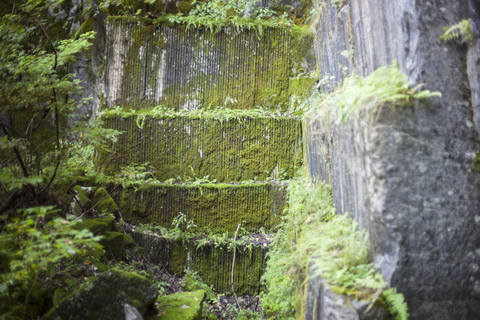 As quarrying technology evolved, the ‘plug and feather’ method was quickly replaced in the early 1900’s by tools that used compressed air to separate stone. 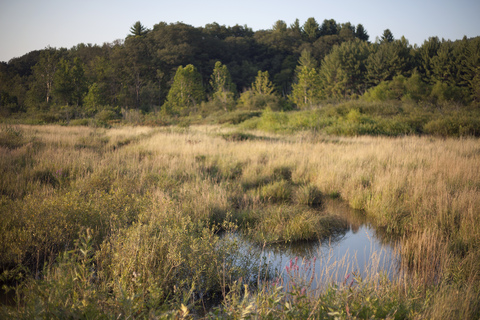 Purple Loosestrife is a wetland species that became established on the North American continent as early as the mid-nineteenth century. It arrived accidentally in the ballast water that trans-Atlantic ships used for added stability, but was also intentionally cultivated for medicinal and decorative purposes. Even today, it is a favored source of pollen for beekeepers. However, this plant has the ability to rapidly establish itself and modify a landscape. It aggressively replaces native vegetation, alters water flow, and offers little benefit for local wildlife. 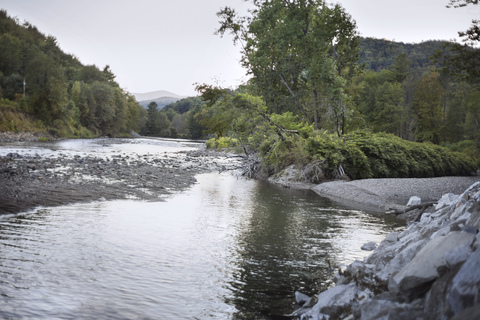 Tropical Storm Irene destroyed and often relocated the banks of several Vermont rivers. These banks were rebuilt, and often ‘put back’ to where they were before the storm. Flood waters and several of the materials that were used for reconstruction often carried invasive plants such as Japanese Knotweed. 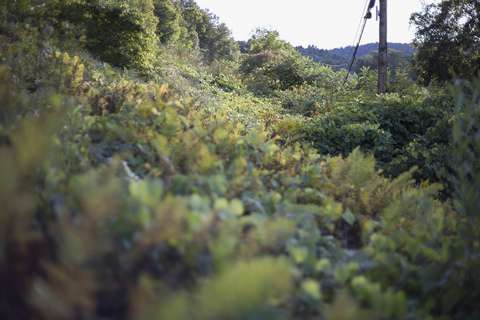 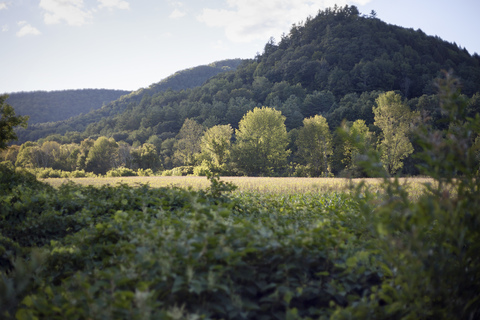 South of White River, near Heap Pinnacle and Naught Hill
2013

Japanese Knotweed was introduced to the US in the late nineteenth century as an ornamental plant. It is now classified world-wide as an invasive plant. Despite its destructive qualities, it is actually edible. Young shoots in the spring are said to taste like rhubarb. 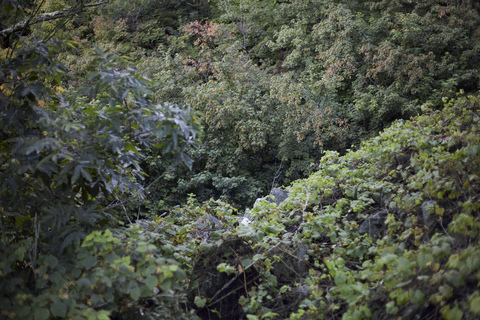 Quarry waste piles are often so deep that nothing can grow from them. Yet, the clearing it offers proves ample sun for anything that can grow across them. 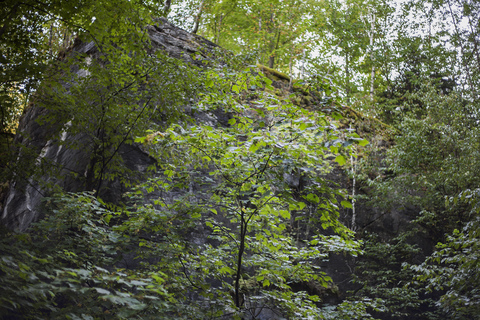 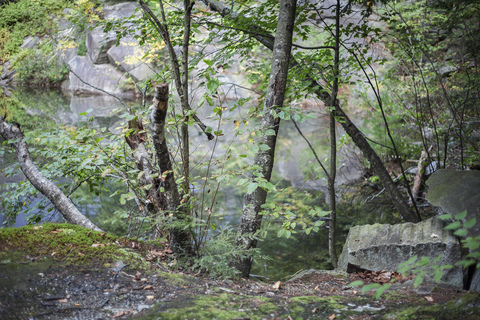 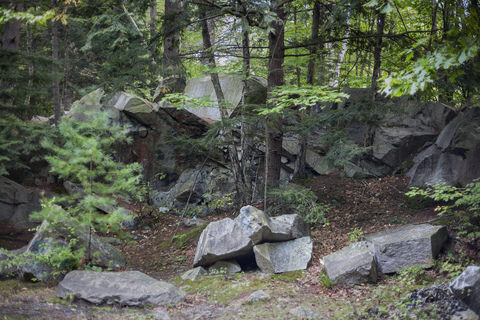 Quarry owners in Dummerston owned the section of the West River Railroad that ran to Brattleboro. They used the line to carry granite. After a tropical storm in 1927 caused severe flooding and damage, the railroad and railbed were sold in 1936 to a salvage company who ripped up and scrapped the rails. In 2011 the Friends of the West River Trail acquired the deed and rights to the land and turned the former railroad into a popular recreational trail. 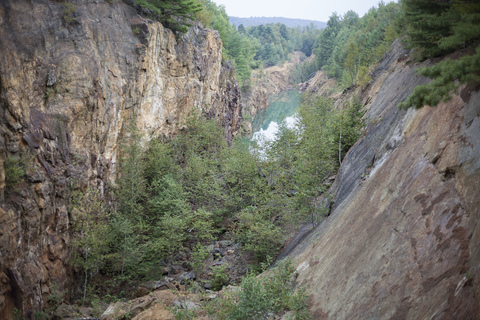 The Elizabeth Copper Mine was operative between 1809 until it closed in 1958. It is now an EPA Superfund Cleanup site, and chemical levels keep the lake free of vegetation and animal life. Despite every effort to keep trespassers away, a Google search for “Copper Mine Cliff Diving” yields YouTube videos of adventurous swimmers jumping– illegally– into the turquoise blue water. 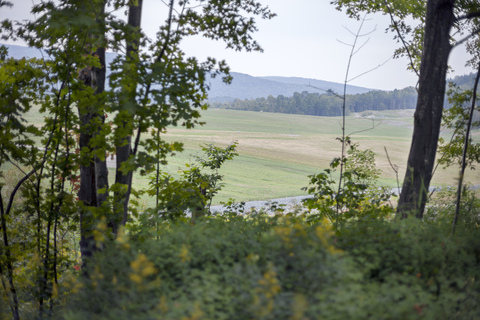 Chemical runoff from the now inoperative Elizabeth Copper Mine has rendered land unusable for most purposes, especially agriculture. Proposals are being considered for solar panel installation. 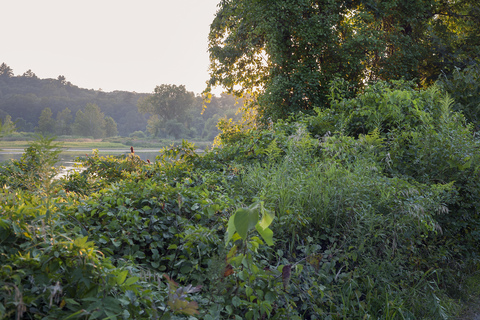 Even before the most recent tropical storm to flood Vermont, invasive species spread along Vermont’s waterways. Bittersweet, Buckthorn, Japanese Stilt-Grass and others occupy the banks of the West River as it joins the Connecticut River in Brattleboro, Vermont. 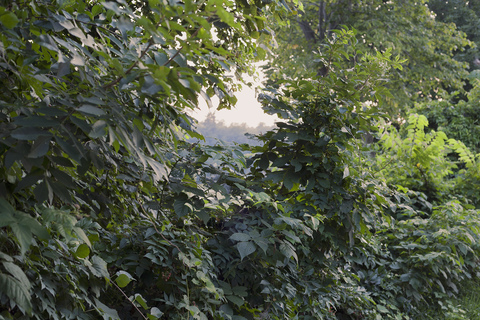 Detail on the West River Shore
2013

Wild blackberry seems innocuous with its summertime fruit, yet it is an invasive species. The USDA classifies it as a Class A noxious weed. 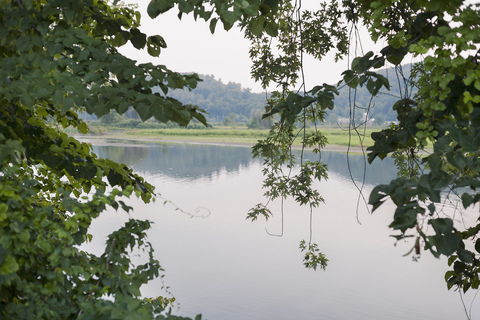 Retreat Meadows on the West River
2013 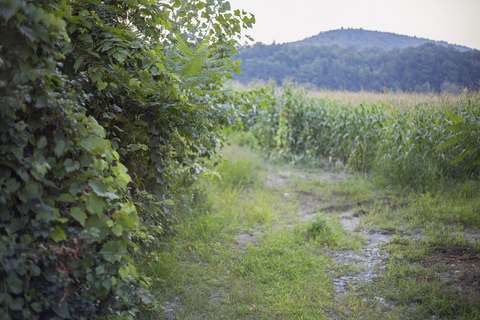 Agriculture in the state was gravely affected by the silt from Tropical Storm Irene. The FDA restricts crops that have come in contact with storm flood waters, and has strict guidelines for the replanting of fields that have been flooded. 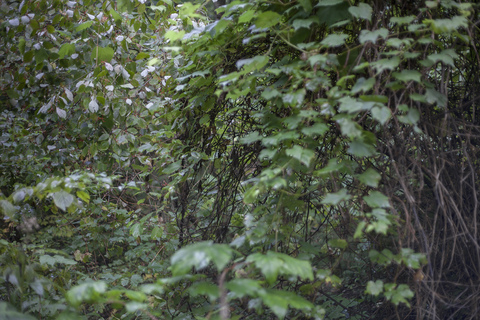